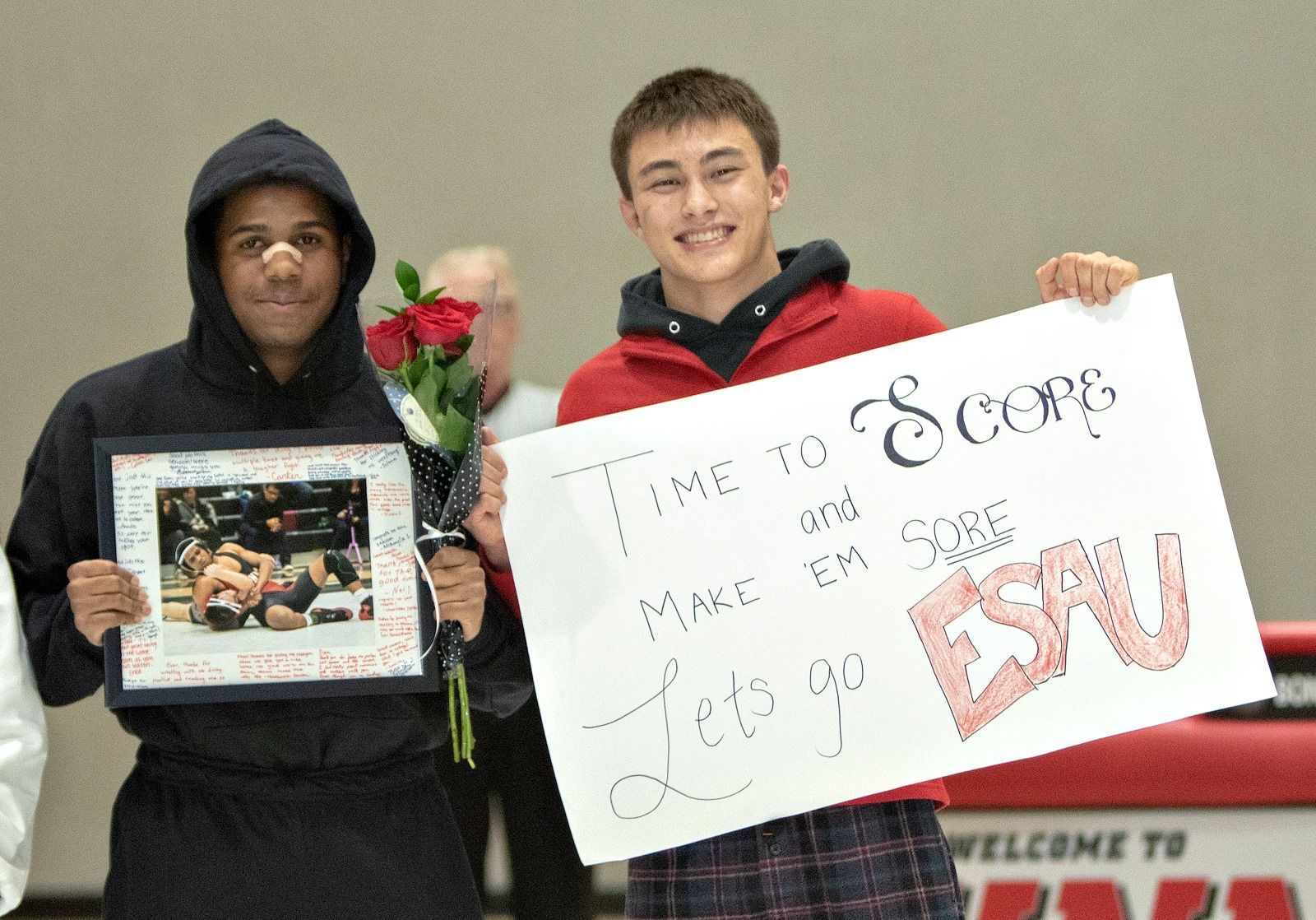 Congrats to senior wrestlers Phillip Doan and Esau Ferdinand Jr. who were honored at Senior Night!

Congrats to this week’s Honorable Mention Athletes Emersen Sweeney (Soccer) on receiving recognition from Palo Alto Online on 2/12. This is Emersen’s second time this month to be honored!

Gunn Girls' basketball lost to Fremont in a hard-fought SCVAL El Camino Division game Friday night. The final score was 56-43 despite 14 points from Mollie Kuehler and nine from Pooja Bucklin. Next up, come support the girls as they travel to take on Santa Clara on Friday night, 2/14.

Gunn Boys' basketball beat visiting Fremont 57-45 Friday night, 2/7 in a SCVAL El Camino Division contest as Akash Ravani and Kaden Holdbrook each scored 17 points. Next up, come support as they travel to take on Santa Clara on Friday, 2/14.

Gunn (11-3-2, 9-0) downed visiting Fremont 2-1 on Friday, 2/7 night to remain undefeated in SCVAL El Camino play. Mia Steadman scored in the 77th minute after taking a long cross from Elina Saab-Sundén to break the tie. A win or tie against host Lynbrook next Friday, 2/14 will clinch it for the Titans no matter what the rest of the league does early next week. In the first half, the teams traded chances. Morgan Cianfichi got Gunn on the board first when scored off a rebound from an Ana Schremp shot. Fremont opened the second half with an equalizer and the score remained deadlocked until Steadman's goal. Senior Nicole Smith recorded five saves in 80 minutes in goal for the Titans.

Emersen Sweeney scored three times and Ana Schremp recorded a pair of assists as Gunn beat host Milpitas 5-0 on Wednesday, 2/5 to reinforce its grip on first place in the SCVAL El Camino Division. Mia Steadman and Elina Saab-Sundén also scored for the Titans. Gunn owns an eight-point advantage over second-place Fremont. Sweeney has scored seven of her nine goals over the past three matches. She's second on the team in scoring behind Schremp, who has 11 goals and nine assists. Schremp has recorded at least one assist in each of her past six matches.

The Gunn boys' soccer team clinched the Santa Clara Valley Athletic League El Camino Division title Tuesday, 2/11 with a 2-1 victory over host Monta Vista. In the second half, senior Rayan Taghizadeh scored a break away goal from an overhead through ball delivered by junior Nickolas Romero. Junior Joey Cianfichi added another goal off a penalty kick, earned after freshman Kevin Landeverde was taken down in the box while driving to the goal. Monte Vista scored a last-minute goal in the game.

League finals are at Los Altos High School on Friday, 2/14. Boys start at 3pm on Friday and Girls wrestle on Saturday, 2/15. Finals for boys and girls Saturday night!

Congrats to senior wrestlers Phillip Doan and Esau Ferdinand Jr. who were honored at Senior Night! Way to go Phillip and Esau on your wrestling success at Gunn!

Gunn had individual wins at their last regular season match as they head to SCVAL finals. Phillip Doan (152) won his final home match at Gunn with a second period pin as did Justin Lin at 126 pounds. Junior Armin Abolhassani won 6-0 at 182 and Neil Hanson won 6-5 at 220.

Stephen Martin, 2014 grad, coached by Chris Horpel while at Gunn earned an individual gold medal for the 184-pound division at the California Community College Athletic Associate State Championship. Martin spent the vast majority of the year as the No. 1-ranked wrestler in the state. He had a perfect 31-0 record.

-All athletes going out for a Spring sport must register at AthleticClearance.com. Athletes must also have a current athletic physical to start practice or tryouts.